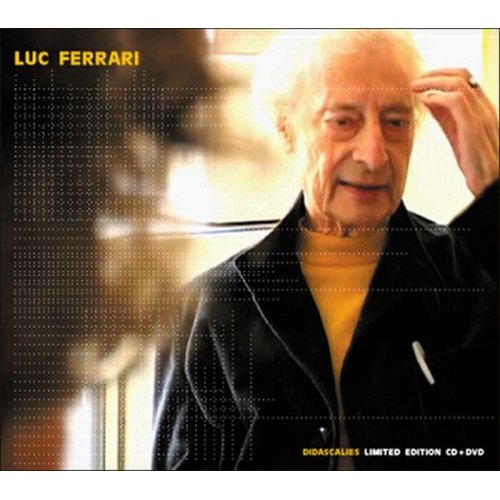 This is a new version of Didascalies, previously released as SR 259CD. This version has the same music as SR 259CD, but with new cover artwork, plus a bonus DVD disc (European PAL-format only). Didascalies is the last release in Sub Rosa’s three-part series of instrumental works by this important artist, now packaged with a DVD featuring Luc Ferrari at work on this — his last experiment. Luc Ferrari is considered one of the most legendary musical figures of the twentieth century, whose work and aesthetic continues to influence several generations of contemporary composers. Director of the Groupe de Recherche Musicales which he established with Pierre Schaeffer in Paris from 1958-1966, he is also one of the masters of musique concrète who influenced and expanded the genre with electro-acoustic instrumentation. Right from the start, the idea had been to release three very different CDs: one hörspiel, one of concrete music (new and older pieces) and one CD of instrumental works. Les Anecdotiques was the first step: a vast sound-film of more than an hour that explores in 15 steps the intensity of re-composed sounds from his continual travels around the world, with additional electronic structures. Son Mémorisé was a retrospective of concrète and electronic compositions. Didascalies brings together “Rencontres Fortuites,” “Didascalies” and “Tautologos III” — two recent works for piano, viola and electronics, and one open-ended work — which featured at a concert at the Boendael Chapel in Brussels. A few months later, this release was assembled with Ferrari’s supervision at the legendary Brème studios with final development at La Muse en Circuit. This release also documents the composition of a new version of “Tautologos,” Ferrari’s last recorded piece, with woven piano and viola breaking down, starting anew in an opposite direction with bandoneon, DX7 and books being closed every two and a half minutes. About a month later, Luc Ferrari passed away. Performed by Jean-Philippe Collard-Neven (piano) and Vincent Royer (viola).